The Library of Congress, a great repository… of something.

The question of the relationship between language and knowledge in the human mind has fascinated philosophers and other deep thinkers since ancient times. One theory is that language is a prerequisite for knowledge and that knowledge cannot exist without it. The common-sense notion that is that language contains or records knowledge.

True or False: “The Library of Congress as a great repository of knowledge.”

Who would not answer, true, without hesitation? But consider the following thought demonstation:
Suppose Socrates[i] told you he saw a cisticola while on a trip to Africa and you asked what that might be.

He answered: “A cisticola is a very small bird that eats insects.”

In an instant you know that cisticolas, have beaks, wings, and feathers, almost certainly can fly, that they have internal organs, that they have mass and hundreds of other properties that were not contained in the sentence.

Let us step through the articulation process that Socrates when through to create the specification for the creation of this new knowledge.

First, he decomposed the concept denoted by the word “cisticola” in his mind into components concepts and selected certain ones that he guesses already exist in your mind.  The key one is “bird” because if you classify cisticolas as birds you will assign them all the properties common to all birds as well as all the essential properties and attributes of animals, organisms and physical objects; a large body of knowledge.

Second, he selected concepts that will be useful for you to distinguish cisticolas from other birds, their size is very small comparatively and they are insectivorous.
He now has a parts list for the new concept to be constructed in your mind from items that you already have in your cognitive warehouse: bird, very, small, eating, insects.

Third, he provided the assembly instructions: he choose some connective words; “is,” “a,” “that” and arranged all the words in a specific grammatical order.\
Thus, natural language is a communications protocol between two entities that have pre-existing knowledge. Each sentence is an instruction, not different in essence from a line of code in a computer program. 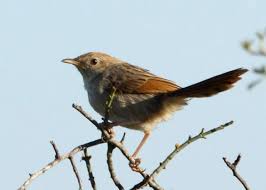 A cisticola: A picture is worth a thousand words, but only if you know what your’e looking at.

The process of composing the instruction by the sender is called articulation. The receiver interprets the instruction to assemble a new concept in accordance with the specification expressed by the grammar from pre-existing conceptual components. This process is called language comprehension.

All the books in the Library of Congress are records of such instructions which can only be converted to knowledge when read by someone whose pre-existing knowledge is sufficiently compatible with that of the authors. Therefore, inescapably, we must conclude that language is information not knowledge and it does not contain knowledge.

Today programs that use human natural language in their inputs or outputs are becoming increasing popular.

products like Amazon Alexa and chatbots are commonly referred to as AIs, but they’re just sophisticated programs built on top of machine learning, natural language processing, and statistical algorithms.

The biggest misconception that arises is that a chatbot is a bot that converses with a human in the way that another human would converse with a human…, this is simply not possible using the current technology.

The “current technology” referred to in the second quotation is specified in the first: machine learning, natural language processing, and statistical algorithms.

To converse like a human, you must able to articulate and comprehend like humans as described above. Both processes depend on a pre-existing “warehouse” of concepts containing component concepts that can be assembled to create new knowledge. Such a warehouse is comprised of knowledge and is essentially a model of the world or the domain of comprehension. None of those techniques employed by chatbots possess such a “warehouse.” The very idea of a modelling knowledge in software was abandoned by the “AI” community decades ago is being too difficult.

New Sapience has succeeded in creating such a model in a machine and our software implements the processes of comprehension and articulation in the same step-by-step sequences described above. For the first time a computer program can converse with a human in the way that another human would converse with a human.  This opens a broad new market of powerful applications forever, beyond the reach of chatbot technology.

[i] Compare this thought demonstration with the one in the Platonic dialog Meno, where Socrates attempts to prove that all learning is memory. Through a conversation, he leads a boy to comprehend the Pythagorean theorem. We assert that the boy did not have knowledge of the theorem in the first place, but he possessed the component concepts needed to create it and Socrates provided the instructions needed to put them together.