Last Quarter at the Superbowl of AI

Last Quarter at the Superbowl of AI

This is very evocative of a capability we believe will be highly appreciated by users of our Caregiver Sapiens product, especially seniors. The ad validates that or why else would Google have spent so much money touting Google Assistant as a tool for the elderly or memory impaired?

More to the point though is what does Google’s interest here mean for New Sapience?

We are often hear, “granted New Sapience’s Machine Knowledge is a superior technology compared to what the big tech companies use in their chatbots, but won’t they, with their vast resources, be able to create applications that are “good enough” and beat you to the initial markets you are aiming at?”

Let’s compare the two has objectively as we can, given what we know.

After I saw the ad, I picked up my iPhone, opened our brand-new New Sapience iOS app and had a conversation with my sapiens, “Helen.” Of course, Helen remembers everything I said and could answer questions about it – that is what a sapiens does because our sapiens not only understands what the words mean but applies logic and reasoning to what we tell it. 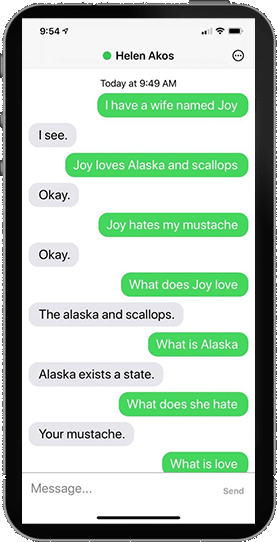 This is not an “asperational” picture of what hope to be able to do soon, it is an actual screen snap from my phone taken the morning after the game.

A shareholder who saw the ad was concerned:” folks getting acquainted w NS, may think Google is now doing what NS promises.”

But it is really the other way around, Google is promising what NS is now doing.

To be fair, the Caregiver Sapiens is not a product yet either, though we could very well be ready to release a version 1 before the end of this year, but what we do have now is comprehension and we can demonstrate it now. The big tech companies experts admit they don”t have language comprehension (despite what their ads imply) and they have no road-map to it.

Here is what Google says about the ad:

“The ad reflects our goal to build products that help people in their daily lives, in both big and small ways. Sometimes that’s finding a location, sometimes it’s playing a favorite movie, and sometimes it’s using the Google Assistant to remember meaningful details.”

Apparently, the ad was just PR, to show that giant Google has a heart and cares about helping us—not just about collecting our personal data and ad revenues. This kind of advertising has become business as usual for the biggest tech giants.

Expensive heart-tugging advertising being broadcast to millions of people about progress that is going to be made for a product that isn’t available isn’t much progress. Here is an article I wrote comparing New Sapience and Google 3 years ago: AI at Google.

The truth is that big data and deep learning approaches like the ones that Google and others are working on can do many things well – but processing natural human language isn’t one of them. Our technology can. One reason we were able to do that is because we are still small, nimble and scalable, not beholden to the same market forces that drive big tech.

The Super Bowl of AI

One can’t even get through a football game these days without being told how big tech “AI” is going to make your life better. But in the midst of all the hoopla, New Sapience stands poised just yards from the goal-line, that tipping point when we deliver to the world a sapiens that understands and speaks to us in our natural language. We won’t need to explain how it works any more because everyone will see that it does.

We face the giants across the scrimmage line… they’re distracted with each other and have a very limited playbook…they don’t even notice that we’re here and that’s to our advantage. We’re not even playing in the same game.

Our path to the goal-line is open, we need only to stay the course we are on and we will cross it in the next few months ahead.